Back to Book Details

Why do we celebrate Valentines Day ?


Back to Book Details Report Reviews

Why do we celebrate Valentines Day ?

You must have to know the story behind the Valentines Day . The story is some what like -
At 300 A.D the Rome is ruled by Claudius II , he was very cruel king . He thought the young man in his kingdom is more powerful and efficient as compared to married person. In order to make his kingdom more powerful. He make a rule in his kingdom that the Young person can not married. As the result all were against this rule and unhappy . This rule was strongly opposed by a Saint, named ST. Valentine, he decided that he will silence the state (hide from king) and marry the youth. So he start doing this. But king somehow came to knew about that and imprison saint. After Someday Jailer came to meet saint and begged him for the treatment of her blind daughter and saint agree to do so. Now both saint and Jailer's daughter started to interact with each other on daily basis, after sometime both of them have a feeling of love for each other. One day a miracle happen, when Saint touched her eye (with so affection and love), she started to see everything, now she is not blind anymore. But king somehow came to knew about both of their love and sentence death to saint. When saint is going to die just before that saint written a letter to his love, in the ending he write from your VALENTINE. The saint was hanged on 14th February. 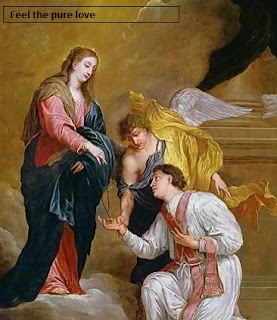 So the Valentines day is not just the day of lover , it is the day of love . It is feeling of love , Which you feel for anyone it may be your mother, father, sister anyone . So try to feel the true love always . Lets celebrate the real Valentines Day

Please Follow us for more intresting and short story -

Well, Saint Valentine was martyred for fighting for the basic right of Marriage and he performed many marriage ceremonies of many young couples as a priest , he had to pay for this . I would urge you to look into 2 more historical tales about the priest named Valentine in Christian tradition, anyways St .Valentine's Day is meant not to honour obsene and evil relations between the two unmarried people called as a love affair , but to honour the holy relation of marriage, thank you .