Back to Book Details

ZBIGNIEW ROTH (Poland): Can I find a Rose?


Back to Book Details Report Reviews 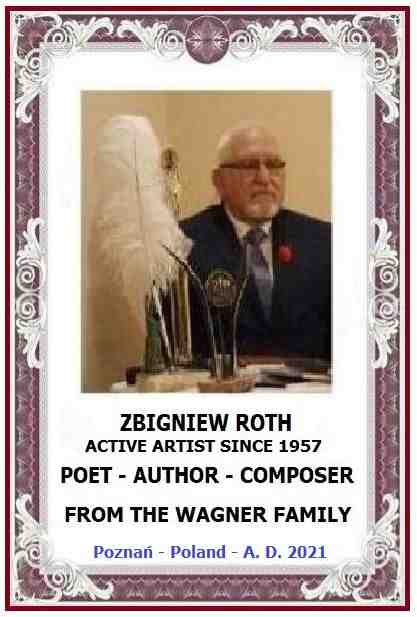 He is an author, composer, poet with 64 years of experience as a writer, he has been writing since 1957 and celebrating his 53rd anniversary in his work as a composer, he has been composing since 1968. since 2007 - Member of the Polish American Poets Academy based in New York, USA, since 2009 - Honorary Member of the Literary and Dramatic Group. K. Przerwa - Tetmajer in Chicago since 2012 - Honorary Member of 83 Infrared Circle in Chicago USA, since 2013 - a member of the Polish Association of Authors, Journalists and Translators in Europe A.P.A.J.T.E. based in Paris France, since September 2014 a member of the Polish Society of Artists, Authors, Cultural Animators PTAAAK in Poznań and since 2016 a member of SAP Branch in Kołobrzeg. Since 2020, he is a Critic Correspondent Journalist in the field of Poetry and Song, Polish-Italian TV News. President and Founder of the SSAP World Association of Artists and Writers (on line and nonprifit) Poland, the International Peace Ambassador of the World Literature Forum and the World Peace Ambassador of the World Organization for Peace France & Switzerland. In February 2021 he is nominated for the International Coordinator of the Panorama 2021 Festival in Poland.

He writes and publishes both on blogs and websites in Poland (e.g. www.naszaklasa.pl, where he is clearly successful because his poetry is widely read there, and abroad, e.g. in Canada (www.zaoceanem.za.pl), in Chicago USA He has achieved his achievements in both poetry and music. He has been writing and composing since 1957, but he started publishing his works in the form of cassettes and then CDs in 1994 after his children from the Children's Vocal Group "ATO MY" won Silver Applause several times the winner of the Provincial Children's Song Reviews in Poznań), whose repertoire was a children's song by him. Radio List of Hits and on the TOP List mp3.wp.pl ZBIGNIEW ROTH - Poet, author, composer, educator, author of texts and music of songs of various themes and purposes. A scholarship holder of the Wielkopolska Cultural Society based in Poznań in the field of stage song composition. Since 1986 he has been successful in the National Children's Song Contests in Konin. He ran the "Koci Klub" Children's Team. In 1987, Justyna Kubiak, the group's soloist, wins the Provincial Qualifications of the Children's Song and Dance Competition and takes part in the "Konin'87" National Song and Dance Festival. In 1988, Mirek Michalak, the band's soloist, wins the next Provincial Children's Song Review in Poznań in the younger soloist category and takes part in the 1st International Festival of Children's and Youth Songs "Sopot'88". Zbigniew Roth runs the Interschool Children's Vocal Group "A TO MY", which he founded in 1989. The year 1992 was particularly successful. In the oldest age category of the Provincial Children's Song Review in Poznań. The soloist of the band Anna Polowczyk takes first place, receiving nominations to participate in the 12th Festival of Song and Dance "Konin'92". Karolina Moczyńska and Anna Sieg, soloists of the group, win two distinctions. In 1993. Anna Polowczyk, during the next Song and Dance Festival, "Konin'93", wins the Silver Applause. Author of hymns (songs) of such institutions and organizations as TKKF, PZK, PZW and Primary Schools in Poznań. Author of the song titled "Eskadra" sung as part of the repertoire of the Air Force Representative Group in Poznań. Corporal's dilemma. Musical works were also presented on the air of Polskie Radio, Radio Obywatelski and Radio RMI FM in Poznań. He was successful in the children's song radio charts. He took part in a television broadcast of Telewizja Regionalna TVP3 from the series "People and their passions" in 1996. Opinions about him issued by institutions and people professionally working in the field of culture: Zbigniew Roth has been active in the field of culture since 1957. Over the years, he is always visible as an active activist and animator of cultural life in our voivodeship. 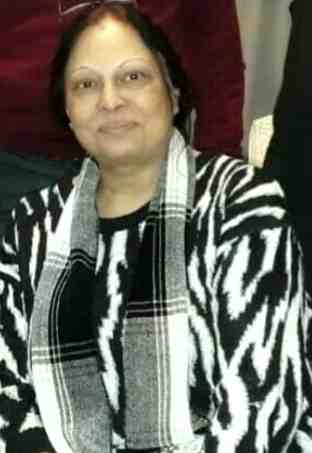 Jyotirmaya Thakur is an outstanding Indian poetess, literary critic, peace activist and multi-prize winner. Her literary works are characterized by a high degree of creativity and authenticity. By the virtue of her intelligence, skill and imagination, she infiltrates human psychology and arrests the most evasive and invisible states of mind; moments of joy, sorrow, tedium, frustration and jubilation in very magically fascinating imagery. Yet, she is not confined to states of mind, she has rather exceeded them to nature beauties brought forth by the changing seasons and their impact on the human soul because she is fully infatuated with Nature. However, she does not theorize or intellectualize about nature as some of the romantic poets did. Being a social activist, she is a true defender of many social issues like women’s emancipation, peace promotion, religious endurance. She is also a true fighter against racial discrimination as regard color, race, sex and religion and the like. Yet, she has not made her poetry a domain for propagating her ideologies. She rather lays much emphasis on the issue of developing her artistic craftsmanship. Therefore, she excelled in all types of poetry- old and new. Her poetry prosperously appeals to her readers’ senses and thoughts because it entertains a higher level of sensuousness; in that the reader can feel, touch, taste, see, smell and hear all the ideas she expresses as intimately, and freshly as if they were already baked.

ZBIGNIEW ROTH (Poland): Can I find a Rose?